Question: Why did the Yankees Cross the Road?
Answer: To get to the new Stadium

Last Sunday, friends of mine and I made the 4+ hour trek north from DC to pay one last homage to the old Yankee stadium. While the team had yet to be mathematically eliminated from playoffs, we knew that even a resurrection of the Babe (may he rest in peace) would not be enough to ensure even a wild card pass into October. This was to be the last game--ever-- in Yankee Stadium, closing a season where every fan was reminded, every day, that 2008 was the last season-- ever-- of Yankee Stadium.

Admittedly, I was "fan-lite" this past season, missing most games in our Sunday ticket pack, and only sporatically tuning in to the NY Post Sports Section. But this game, this excited me, and by the 3rd inning, my mind was already to how I would blog about it. I know this is a dog-focused blog, but hopefully my handfuls of readers will indulge me in this off-topic post.

In true Yankee fashion, the team went out with pomp and circumstance (including a crazy fan that charged the field), and all the attention of major news media that the winningest team in all of sports has enjoyed since the stadium opened. And remember, the team is only moving across the street-- to a state of the art, amazingly fabulous stadium.

In my opinion, The Final Season was a marketing masterpiece on many, many levels. The Yankee enterprise so successfully branded The Final Season that it took on a personality and meaning all its own. It might as well have been another player on the team... with its own authentic pinstripe jersey.

To best illustrate this genius is the stark contrast with the other NY team (Mets, for those of you grasping for the name), who is also getting a new stadium in 2009, and had a winning-er record vs. the Yanks (until their second epic collapse, not to be confused with the 2007 implosion). What was the last thing you heard about the up and coming Citi Park in Flushing, Queens? Remember, they too are also moving across the street.

The Yankees successfully dominated the news media with references to nostalgia and records, championships and family commaraderie. They successfully convinced fans to pony up the cash and credit to buy new merchandise, that looked just like the old merchandise, only with a "Final Season" patch (guilty as charged in case you were wondering). They successfully convinced 400 million fans to watch the floundering team that had fired their beloved manager, and hadn't been such a long shot for the playoffs since the late 60's. They successfully convinced boatloads of fans to to arrive at the Stadium doors 7 hours prior to the first pitch of the last game, only to sit in stadium seating and watch the equivalent of Yes Network b-roll on the tiniest jumbo-tron in the Majors. And, remember, they were ONLY moving across the street.

Honest to goodness, I firmly believe the White House could have moved across the street with less media attention than this. At least 6 minutes of 1010 WINS "22 minutes, we give you the world" was about The Final Season that Sunday!

Not that it needed any help, but the Yankee enterprise appropriately coined Yankee stadium a "cathedral," structurally crumbling it may be, of Baseball. The opening ceremonies started with additional reminders of it being the last game ever, and closing a legend, yada yada... but no worries, by the 7th inning, fans were re-assured that the team was not deserting them, that these memories would not end...because the team was ONLY moving across the street.

Perhaps my favorite memory of Yankee Stadium will be my young nephew standing outside, telling me he was upset that the "House that Ruth Built" will be going away, and wondering just who will literally be "building" the new house. After assuring him that it would not be A-Rod out there swinging a shovel and leveling dirt, he still seemed less than convinced that leaving a "cathedral" as steeped in memories and history would be a good thing, despite the fact that parts of the upper deck were known to fall down. And, I probably failed to assure him that the team was only moving across the street. They were not deserting him, they were not going to cease playing the game, or stop making records.

But my nephew's attitude was identical to the vibe running rampant through the rows and sections of the Stadium last Sunday night. Why were they leaving the place where Ruth, Lou, Mickey, Joe and Yogi and caught, hit and threw their way into baseball history?

I left the stadium that night concluding that the player named "The Final Season's" biggest contribution to baseball was easing the fan's pain associated with giving up the place where so many legends were made, so many memories had, and so, so many championships won. But, next year, the team will be right across the street, so start spreading the news...

Brian and my fifth foster arrived yesterday. Mookie, a two year old small Pug will be with us until we can find him a forever home. He has an eye condition that will probably require surgery, and we will learn more about what that entails later this week.

In the meantime, he is showing us just how pug-like Bruschi is. So much of what he does reminds us of Bruschi when he was a younger pup.

Just an hour ago, he hopped up onto Brian's lap, assuming Bruschi's standard sleeping position (cradled on leg, head on thigh), and began to snore. I would photo it, only that Bruschi is in the same position, on my lap, under my laptop computer.
That's a 'wuff' for now!

Posted by Puggles n Prose at 11:25 PM No comments:

Reason #3 Why I love Puggles: Unity 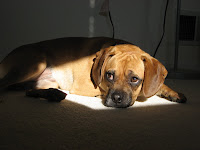 Anyone who gives presentations to groups of people knows that capturing the audience's attention, getting their mind off what happened in their day before they walked through the conference room door, and creating interest and excitement in the topic is crucial to success-- and so much of that is determined in the initial moments of the presentation. We all look for that collective "chill" of the group, so that their brains are positioned to accept the information we are about to share.
Well, I have a secret weapon in the conference room. And it is.... wait for it...... The Puggle.
I happened to realize this untapped power of the Puggle recently, in a serendipitious way, during a presentation where the attendees all walked in, very, very stressed, and anxiety-ridden. What had wound their nerves back at their desk had not been forgotten, and any anxiety over our topic was staring them in the face.
Within a minute of entering the room, what also was staring them in the face was my computer wall-paper image of Bruschi (shown above) projected onto a large screen. A simple glance at that perfectly cute little wrinkly forehead elicited a collective "awwwww" across the room. Tensions were released, and conversation quickly turned from "did you get that email" to "oh, what kind of dog is that?" "How old is he?" "Did you take that photo?" "My goodness that is the perfect photo."
I now had the attention, and interest of everyone in the room, from the CEO who had to make decisions to the intern taking notes. I was ready to move forward. The picture of the Puggle did in less than 10 seconds what no average human could do in 20 minutes, if at all.
Was Bruschi really was the catalyst for what ended up being a ridiculously successful meeting. I do believe that his image provided the group with a "brain break" of sorts, along with creating a common ground-- everyone in the room was able to agree on something-- that this dog was cute. The dog created a sense or sort of unity of opinion among those around the table that was lacking at the start.
A while ago, I started working images and references to my dogs into presentations, either as clip-art, or to illustrate a point, or simply as an ice-breaker. More recently, I set my wallpaper to this image of Bruschi that I took one morning. He was sitting in a sun spot, I was running late for work, searching for my favorite Charles David shoe. The shoe could not be found, but the camera was sitting on the ironing board. It made me smile in the morning when I booted up, even more than my previous image of Brad Pitt and George Clooney in Oceans 11.
What was so great about the wallpaper doing the work for me, vs. a slide in the presentation, is that I had the room's attention before that first slide ever appeared. They now were excited about the deck, and approaching the material with true interest-- because they had the opportunity to forget the baggage that followed them in to the meeting.
I could talk tons about the emotional and psychological effects that all pets have on humans, the endorphines that their images can stimulate, and studies that show simply petting a dog can lower blood pressure (and conversely, how a puggle stealing a sandwich can make it rise to new heights)... but....
...That's a 'wuff' for now!

Kicking the week off with kittens!

Earlier today, my friend and I photographed some ridiculously cute 6 week old kittens that were recently rescued. These five little fluff balls had the most beautiful eyes, and the teeniest, tinyest paws, each smaller than the palm of my hand.


A foster mom will raise them in her home until they are old enough to be spayed or neutered, and adopted.


I know nothing about cats or kittens, except that they look cute, and Kodi would probably try to eat one if allowed. Well, maybe just nibble.


Below are a few photos of some of the cuties.

Posted by Puggles n Prose at 9:38 PM No comments: