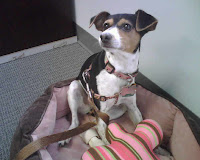 Every few months, Kodi visits the Veterinary Eye Doctor so that her left eye can be evaluated and we can stay on top of what treatments she needs. In addition, she sees a Chiropractor regularly and she gets regular doses of eye medicines. (eye shown most prominently in photos is affected eye).

For those who don't recall, Kodi has some nerve damage that limits her eye's ability to produce tears, and, causes her to drool a bit when nervous (she can't swallow her saliva on one side of her mouth)

Yesterday we took her in for a routine exam and learned that her eye is producing close to DOUBLE the amount of tears it typically does. DOUBLE!! For a while, she was measuring a 3 to 4 on the 'tear duct scale' test (from 0-10). Yesterday, she got up to a 6. The more tears she produces, the less discomfort she is in, and the better equipped her eye is to fight infection.

And, last night, during a visit to the dog park, she not only interacted with others, BUT did not drool.

We are very fortunate that Kodi has an amazing team of doctors helping her out. And, what I love even MORE is that the vets she sees believe that the chiropractic care she receives helps keep her healthy.... hmm... perhaps human MDs can take a lesson from the animal community.

Check out past blog posts on Chiropractic care, and history on Kodi's eye condition.
Posted by Puggles n Prose at 9:55 AM No comments:

Why I hate retractable leashes 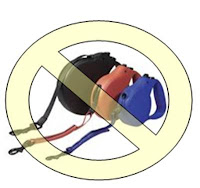 Earlier this evening, Brian and i were walking our dogs on the sidewalk of a usually busy, four lane road (George Mason Drive for those NOVAns). About a half block ahead, a woman walks out with two medium to large dogs taking up the sidewalk, so we quickly move into the curb, about a car width away, and start talking to our dogs to keep their attention. There weren't any cars coming behind us, and if it wasn't a four lane road, we would have just crossed.

Of course, when within lunge distance, this woman's dogs who were both on unlocked retractable leashes, go nuts... And because the leashes are unlocked, allowing the cord to extend seemingly endlessly, the woman can not control her dog from dashing out into the street to jump on Bruschi. And because the handles are so thick, she drops one, which enables the other dog to lunge over to Kodi and near pounce on her, had Brian not done some quick thinking and pulled her mid-air then scoop her up (she wears a harness, so no stress on her neck).

And, because I was crazy annoyed at both my dogs getting pummeled on a walk, I yell "You need to lock your leashes with your dogs, or they are going to hurt someone, or get hurt," And she yells back "I can't seem to control them, they keep pulling from me." You don't say?!

The very concept of using a leash is that it keeps your dog with you.... not away from you. A retractable leash allows a dog to take liberties on a walk that some just should not have. Like, in this case, these dogs clearly were not calm when others were passing by, and the woman could not reel them in. A regular leash, she could have just pulled up on, stepped on, or simply not dropped.

I'm sure this woman really loves her dogs-- but fails to realize that her dogs could run into traffic, getting hit by a car if not careful. Or, bitten by another dog it charged.

I know they are popular, but these leashes generally do not make life easier, if anything, they require an owner to think about one more thing on walks. What if your finger hits the little button, releasing the lock and the cord, and the dog has free reign in to trouble? What if YOUR dog passes another whose owner can't control the leash or the dog?

I don't know about you, but between, keeping my dogs' attention away from squirrels, watching for signs of poop, and stopping every other tree to pee, I've got enough to think about.

Reason #2 Why I Love Puggles: Their Expressions

All dogs express emotion, but I have to say I believe Puggles have among the most expression-rich faces of all dogs. The wrinkly face, the defined eye-brows, the wide-topped ears, and the cute little round-snout nose are true enablers when a dog tries to show happiness, frustration, mischief, sadness, remorse, fatigue, and excitement....and then there's the tail!

The Puggle's display of expression is just one other tool they have in their box of tricks for wiggling their way into human hearts.

Labels: Puggles, Why I Love Puggles

Why I Love Puggles...

There has to be an endless (or at least an enourmously high) number of reasons that I love Puggles... besides the basic fact that they are dogs, and they are cute. And I can't write them all in one day, much less one night-- but over the next month, check back regularly for the latest on "Why I Love Puggles."

Reason #1 Why I Love Puggles: The Snuggle Factor.

Puggles are snugglers. They don't just want to be near you, they want to be next to you, or on top of you, or somehow sandwiched between you. It is well known and documented that dogs do not like nor need hugs-- some will tolerate hugs from humans because they know we feed them. But Puggles tell you they want to snuggle, and will not be ignored.
Posted by Puggles n Prose at 1:05 AM No comments:

Labels: Puggles, Why I Love Puggles

It's Friday night-- about 11 pm. I just got home from an adoption event (Pinky needs another home-- any takers?). I sit down on the couch, and grab the laptop, which is Kodi's cue to come bounding from the other end of the room, onto my lap, and properly place my hand onto her head for a pet, and to continue petting, and not to stop petting... even though I am trying to type all about her on the blog.

This, is Friday night fun for a Rat Terrier. Curled up in the tighted little ball, next to a warm human, who is a sucker for petting pups. Don't even think of stopping, because a guilt-ridden nudge will get you back to stroking her silky soft coat.

(Note: it is taking double the amount of time to type this, since one hand must be on Kodi-head at all times... or else).
Posted by Puggles n Prose at 10:44 PM 3 comments: 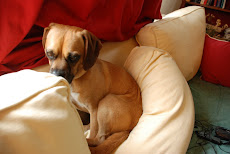